Juneteenth is a celebration. It’s not solemn, it’s filled with joy and pageantry. It’s not a funeral. But 2020 Juneteenth is uncomfortably juxtaposed with police violence against Black people, protesters in cities all over the nation and funerals — too many funerals.

Juneteenth is one of America’s oldest holidays and is observed each year on June 19 to mark the official end of slavery in the United States. The day has long been celebrated by black Americans as a symbol of their long-awaited emancipation. But the story behind the holiday starts 155 years ago today in Galveston, Texas.

On June 19, 1865, Union troops led by General Gordon Granger arrived in Galveston, Texas, to break the news to the last remaining Confederate sympathizers that they had lost the Civil War and that all slaves must be freed. The Union general read aloud to the residents of Galveston:

The people of Texas are informed that in accordance with a Proclamation from the Executive of the United States, all slaves are free. This involves an absolute equality of rights and rights of property between former masters and slaves, and the connection heretofore existing between them becomes that between employer and hired laborer.

The newly freed slaves celebrated emancipation with prayer, feasting, song, and dance, and the following year, the first official Juneteenth celebration was born. But the importance of Juneteenth is that it is rooted in a long history of struggle for freedom and then perhaps the greater struggle to maintain freedom in the face of the enormous repression that was to come.

The Struggle for Freedom Continued 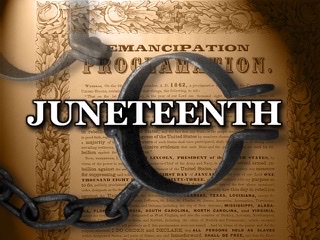 It turned out that being free did not mean being being treated with respect. Yes, it was the true end of the Civil War, but it was also the beginning of Reconstruction, a time that was supposed to be very happy and hopeful. Yet the period of Reconstruction became a miserable time for freed Black people because Reconstruction became part of the redemption of the South. As such, it set out to move African Americans to indentured servitude. While President Abraham Lincoln abolished slavery in his Jan. 1, 1863, Emancipation Proclamation, rebellious Confederate strongholds dotted across the South delayed the widespread implementation.

The South would not hear of the end of slavery, and landowners moved heaven and earth to make sure they had plenty of indentured servants. They were determined to continue the ostentatious lifestyle that they believed was their right and their legacy. They were resolute in their quest to maintain their master/servant status.

Juneteenth has been “passed down” through black communities since 1866, but in this year — 2020 — this nation seems to be at the height of a modern-day civil rights movement. My friend says, “2020 is the year of reset!” People throughout this nation of every race and creed hope beyond hope the 2020 will go even beyond “reset” to reconciliation, transformation and rebirth. So that every person is free, respected and cherished as a part of beloved community. 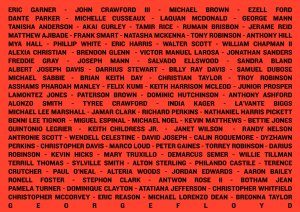 The cruel and violent death of George Floyd under the knee of a Minneapolis police officer might mean that this year Juneteenth may not be only about festivals, parades and cookouts. It may well be somewhat of a silent, reflective vigil for George Floyd, Breonna Taylor, Ahmaud Arbery, Rayshard Brooks, Caine Van Pelt, Michael Thomas, Lewis Ruffin, Kamal Flowers, Momodou Lamin Sisay, Ruben Smith, Modesto Reyes . . . and the list could continue.

It is a list of tragedy and horror. It is a list that is a stain that will ever remain on this nation, an indelible mark of shame. It is a list of names we must never forget. So in your commemoration of Juneteenth today, honor those names, pray for their mourning families, and pray that you will confront racial injustice with an unshakeable resolve.

Juneteenth was meant to be a celebration, although many people might not be able to celebrate today. Heartbreak and horror have a tendency to override celebration and joy. Even with hearts broken, I hope we will find in our hearts even a tiny desire to celebrate this day that was, and is, all about freedom.

May the change that comes from the “2020 movement for racial justice” cause us to celebrate, not mourn, every time Juneteenth comes around — today and forevermore. And may each of us and all of us — a people of God’s creation — witness the rebirth of a nation where every person lives under a worldwide canopy of justice, peace, equality, respect and freedom.

May God make it so through us. Amen.

Celebrate, or mourn, today as you spend a few moments watching this moving and poignant video, “Oh Freedom.”