June 16, 2012 . . . My three-year-old granddaughter standing among the bronze sculptures of The Little Rock Nine.

Her parents had told her the poignant story of The Little Rock Nine, but at age three she had no idea of the many ways their lives would impact hers. Because they crossed an invisible, but very real, line that divided black children from white children, they opened the door to educational equality in a racially divided state. Because their parents were brave enough to let their children breach the three stately doors of Little Rock Central High School, their world changed in unimaginable ways. And with that change, my granddaughter inherited the highly cherished right to equal education and all the opportunities that would follow. Because of that change, my granddaughter would grow up inspired.

In case you do not know about The Little Rock Nine, here is some background.

On September 3, 1957, nine African American students — The Little Rock Nine — arrived to enter Little Rock Central High School only to be turned away by the Arkansas National Guard. Governor Orval Faubus had called out the Arkansas National Guard the night before to, as he put it, “maintain and restore order…” The soldiers barred the African American students from entering.

On September 24, 1957, President Dwight D. Eisenhower ordered units of the U.S. Army’s 101st Airborne Division — the “Screaming Eagles”— into Little Rock and federalized the Arkansas National Guard. In a televised speech delivered to the nation, President Eisenhower stated, “Mob rule cannot be allowed to override the decisions of the courts.”

On September 25, 1957, under federal troop escort, The Little Rock Nine made it inside for their first full day of school. The 101st Airborne left in October and the federalized Arkansas National Guard troops remained throughout the year.

They were nine solemn figures, nine teenagers just trying to do what every child up to age 18 had been mandated to do: go to school. Nine figures who entered the annals of American history the day they passed through the front door of Little Rock Central High School.

These nine African American students — Melba Pattillo, Elizabeth Eckford, Ernest Green, Gloria Ray, Carlotta Walls, Terrence Roberts, Jefferson Thomas, Minnijean Brown and Thelma Mothershed — are now immortalized in a striking memorial located on the grounds of the Arkansas State Capitol in Little Rock. The life-size bronze statues, entitled “Testament,” were designed and sculpted by Little Rock artist John Deering, assisted by his wife Kathy, also an artist. A comment from each of The Nine is found on individual bronze plaques identifying each student. Across the street sits the State Department of Education, just a few hundred yards from “Testament.” This Arkansas State Agency has been embroiled in this same desegregation lawsuit for over 50 years.

Nine young students walked bravely, defiantly, yet filled with fear, in an act against prejudice and ignorance. These nine are heroes of every grueling story of segregation and racism in American history, every story we have heard and the millions of stories we will never hear.

So I am deeply moved by these photos of my granddaughter because there is deep meaning in each one. She seems to be looking up at the sculpture of Melba Pattillo (Beals) with what seems like admiration and awe. Dr. Beals grew up surrounded by family members who knew the importance of education. Her mother, Lois, was one of the first African Americans to graduate from the University of Arkansas in 1954. While attending all-black Horace Mann High School, Melba knew that her educational opportunities were not equal to her white counterparts at Central High. And so she became a part of the effort to integrate Central. 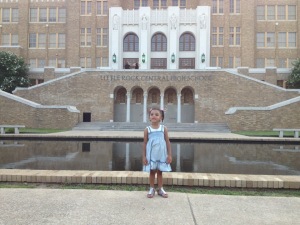 Finally, my granddaughter stands playfully on the steps of the Arkansas State Capitol. I know that it is possible that she may one day proudly walk through its golden doors as a state senator or representative. That is possible because nine Little Rock students were brave enough to be a part of changing history.

At three years old, my granddaughter probably was not very inspired by Central High School, the Little Rock Nine Memorial, or the Arkansas Capitol. But her parents took her there to see and to learn so that she would grow up inspired. When she is older she will remember what she saw and what she learned from that seemingly insignificant sightseeing trip, and she will realize that it wasn’t insignificant at all. It may just be what motivates and inspires her to follow her dreams, because now she knows that all of her dreams are possible. It’s all about growing up inspired. It’s what we want for every child.

Dr. Melba Pattillo Beals, Minniejean Brown Trickey, Elizabeth Eckford, Dr. Carlotta Walls LaNier, Mrs. Thelma Mothershed Wair, Dr. Ernest Green, Gloria Ray Karlmark, Dr. Jefferson Thomas, Dr. Terrence J. Roberts, you made sure that every child can grow up inspired. when you were just young teenagers. When you walked through the doors of segregated Little Rock Central High School, you did so much more . . . for every student who came after you and for my granddaughter