On this Epiphany Sunday, I want to give you a gift — a star.  Not just any ordinary star. My gift to you is a Star Word that I randomly select, eyes closed, from a large bowl. You might be wondering what a Star Word is and what it is for. What is its meaning, if it has any meaning at all?

The use of Star Words, also called “star gifts,” is a prayer practice connected to Epiphany and the new year. The idea is that a list of intention words, or guiding words, are written or printed on paper stars. These paper stars are then arranged face down on a table or in a bowl or large basket. You are invited to draw a word and to use that word as a guiding word for you throughout the year.

I wish I could choose a Star Word for every one of you reading this blog post. Since I can’t do that, I will choose one word from a beautiful set of 150 cards entitled, “Those Who Dream.” My prayer is that this Star Word will become for you whatever it needs to be — a word to contemplate, a word to emulate, a word that becomes an intention for you, a word that guides you in new ways to new places on your spiritual journeymand into the year 2021. More about your Star Word later. First let us think a bit about Epiphany.

Epiphany, you know, is all about the special, more brilliant star that caught the eye and the imagination of three Magi (or Wise Men or scholars or astrologers) or more widely known throughout the world as The Three Kings. Nations and cultures near and far celebrate them in various ways and are amazed by their story. As the story goes, a brightly shining star in the East appeared suddenly in the dark sky and these three saw it and followed it. Each of them bearing gifts for the “King” they had looked for and hoped for.

As scholarly as these three might have been, they had no idea when this new King would appear, where they would find him or how far they might have to travel. So their journey would have to be a faith journey. And once they saw this sight in the inky black sky, this one star that had serendipitously appeared to them, they knew this would be a journey of trust. Their maps could no longer lead them because something significant about the universe had changed. I imagine that this single star had never before been a part of the constellations they studied.

This star was just unexpectedly up there, in the vast expanse of night sky, sparkling all by itself — among the constellations, but in no way a part of them. “The universe has changed,” the three Magi might have thought. And then their thoughts likely went something like this:

We cannot travel with our old maps, our long held assumptions about the ways the stars align in the sky,

our logic and reasoning about where the new King might be found,

our deductions about when he might appear to us,

our intricate, detailed drawings of constellation patterns and webs,

our studies of the prophecies that foretold the King’s coming.

No, these things we have pondered and studied over the decades can no longer lead us to the King foretold! We must follow that one surprising, unforeseen, unpredicted, astonishing, dazzling, breathtaking, bewildering star!

“Star of wonder,” we sing each year. And so it was — a star of wonder, yet a bewildering star, that called to them and beckoned them to follow. They left their old maps behind, I think, and took with them trust. Just trust. And, of course, their gifts, presumably gifts of gold, frankincense and myrrh. Gifts fit for a real live King foretold, if not for an infant born in a stable.

Trust may well be the one single, simple gift we can take to the Christ child in these days. For when our normals are no longer in place, trust is the only real and needful thing we have left. We trust even beyond pandemics and wildfires and earthquakes and storms, even beyond upheaval and confusion and uncertainty and isolation and loss and grief and death. We trust still, maybe because when we look up into the dark expanse we call sky, we still see the dazzling glow of starlight! The stars are still up there aligned in their patterns even if patterns on earth are in disarray.

I think I probably use these lines from a poem** written by Sarah Williams every single Epiphany because I so love its message. At the end of 2020 — knowing that we will still face many of the same challenges in 2021 — I am now, more than ever, comforted by these words that have passed through so many minds and lips before mine.

Though my soul may set in darkness, it will rise in perfect light;
I have loved the stars too fondly to be fearful of the night.

The words call us to trust, even through fear, even when our soul is in the dark. Trust is a compelling and timely message for me for the new year. Perhaps the message of trust will also guide you forward on your journey — through pleasant places along the way, but also through fearful, dark passages. May trust be your guide and lead you well, and may you know that behind trust is a God that never leaves our side.

I am at this moment looking at the bowl of Star Words. I wanted you to see the bowl and the cards inside it. I will turn them over before selecting one. 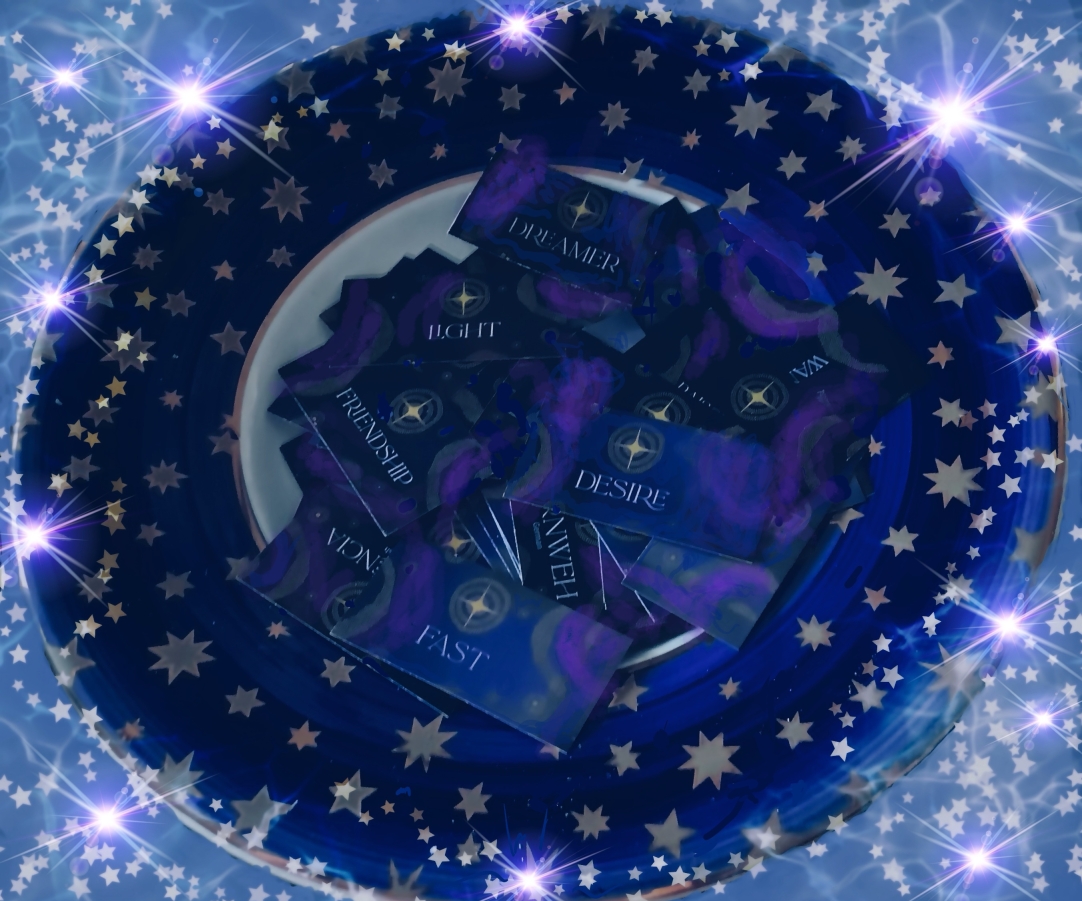 The card below is the Star Word I have drawn out of the bowl for you, in hopes that it might offer you some extra insight for your journey.

Place your Star Word somewhere where you will see it regularly, and consistently reflect on how God moves in you, through you and around you as you contemplate your Star Word. And may the blessings of God be upon you in the coming year.

** This poem by Sarah Williams was published in Twilight Hours in 1868, the same year the poet died. These lines from the poem became the tombstone epitaph of two amateur astronomers, John and Phoebe Brashear, and is located under the Keeler Memorial Reflecting Telescope at the Allegheny Observatory in Pittsburgh, Pennsylvania in a tiny basement room decorated in luminous mosaic tiles. The crypt contains the mortal remains of Brashear and his wife, Phoebe. The epitaph on their tomb, an excerpt from Sarah Williams’s poem “The Old Astronomer to His Pupil,” still speaks to all those who have looked upward in awe.

The last line of the poem also offers comfort: “God will mercifully guide me on my way amongst the stars.”

2 thoughts on ““FEARFUL OF THE NIGHT””