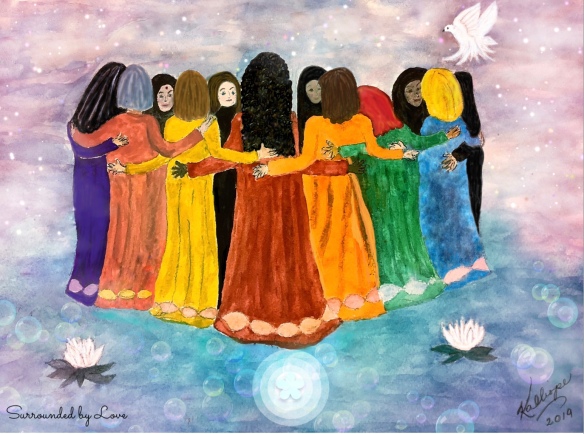 “Surrounded by Love” —  A watercolor by Kathy Manis Findley

On May 17th, I received some devastating news from Piedmont Transplant Center in Atlanta where I had been four years on the transplant list for a kidney. They abruptly placed me on the inactive list, which meant they would no longer be working to match a kidney for me. I was devastated. My friend told me recently that she feared I would give up on the process, but instead she watched me gather up my courage and move forward.

There’s a reason for that, something that empowered me to find another route on the journey that would eventually lead to a transplant. The reason? I call it surrounded by love and all that goes with that kind of love. I found it, I think, at a meeting of Baptist women ministers held at my house on May 17th. After the news from Piedmont, the last thing I felt like doing was hosting a gathering. But they came, a group of women I didn’t really know so well. One of them was a close and trusted friend. The others were friends I needed to know better.

Now you must know that each one of them is a trained and gifted minister, so they knew what to say and how to say it. But the end of the conversation caught me completely off guard. Everyone stood and they created a huddle with me in the middle. It was a hugging huddle — one big, comforting hug. Those moments were comforting, empowering, encouraging, full of grace. My friends mothered me and then they prayed for me, each one.

In those moments I was surrounded by love that has grown deeper with the passing days. From that huddle I was graced with the will to go on, and I did. On November 15, if all goes well, I am scheduled for a transplant at Jacksonville’s Mayo Clinic.

All because I was surrounded by love, a love that I know will not let me go.

6 thoughts on “Surrounded by Love”