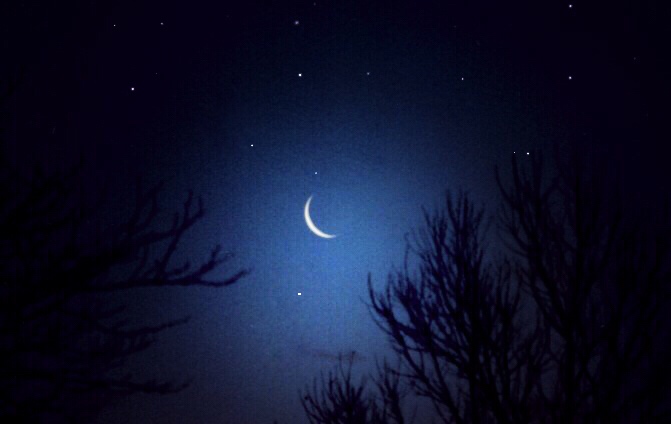 Look up to the skies.
Who created all these stars?
He leads out the army of heaven one by one
and calls all the stars by name.
Because he is strong and powerful,
not one of them is missing.

The other night, I took a minute to look into the sky. What I saw was the sliver of a moon and the most sparkling star I have ever seen. Fred, bringing me down to reality, said, “That’s not a star. it’s a planet.” I dismissed his statement, continuing to look at the star and marveling at its light.

There are more than enough hard realities in this world, so I chose to see a star, a sparkling star that lit up the night. I allowed my imagination to win the moment this time. It was worth it, even for a brief moment.

The truth is that I really want to imagine what might be, to dream of what the future might bring my way. I discovered this when I was so ill, for it was during that time that I needed to learn to dream again. I was living a harsh reality. My only hope was to allow myself to dream of hope and healing and stars in the night. The thoughts of Bishop Steven Charleston give life to the idea of dreaming.

Dream on, even in this world of hard realities, even when the future seems to be clouded, dream on, let your imagination continue to see what might be, what could happen, what can be changed, dream on, for by your dreaming you are not hiding from some harsh truth, but giving yourself a glimpse of the alternative, giving those around you a star to see in the night, dream on, because your dream is hope, it is an affirmation of possibilities, a defiance of diminished life, a vision sacred and healing. Dream on, for from your dreams a new creation will be made.

Look up to the skies.
Who created all these stars?

The answer? The same God of grace that brought me through my harsh days, prompted me to see a star in the night, and helped me dream again. Amen.