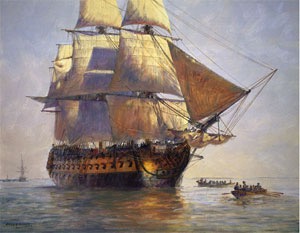 “Amazing grace, how sweet the sound…” So begins one of the most beloved hymns of all times.The author of the words was John Newton, who was born in London July 24, 1725, the son of a commander of a merchant ship. When John was eleven, he went to sea with his father and made six voyages with him before the elder Newton retired. In 1744 John was impressed into service on the H. M. S. Harwich. Finding conditions on board intolerable, he deserted, but was soon recaptured and publicly flogged and demoted from midshipman to common seaman.

Finally at his own request he was exchanged into service on a slave ship, which took him to the coast of Sierra Leone, where he then became the servant of a slave trader and was brutally abused. John Newton ultimately became captain of his own ship and was involved in the slave trade.

Although he had some early religious instruction from his mother, who had died when he was a child, he had long since given up any religious convictions. However, on a homeward voyage, while he was attempting to steer the ship through a violent storm, he experienced what he was to refer to later as his “great deliverance.” He recorded in his journal that when all seemed lost and the ship would surely sink, he exclaimed, “Lord, have mercy upon us.” Later, he reflected on what he had said and began to believe that God had addressed him through the storm and that grace had begun to work within him.

For the rest of his life he observed the anniversary of May 10, 1748 as the day of his conversion, a day of humiliation in which he subjected his will to a higher power. He wrote, “Thro’ many dangers, toils and snares, I have already come; ’tis grace has bro’t me safe thus far, and grace will lead me home.” Although he continued in the slave trade for a time after his conversion, he saw to it that the slaves under his care were treated humanely.

Like all of us, John Newton was not a perfect person. He was enslaved by his own wrongdoing, just as we sometimes are. But what he found was a forgiving God who offered amazing grace.

I hope you will listen to an exquisite arrangement of this hymn on YouTube. Follow this link, scroll halfway down the page and you will see the video of BYU’s Noteworthy, a very talented a capella group.
http://inspiremore.com/noteworthy-sings-amazing-grace-a-capella/

As a part of this arrangement, they sing these words:

My chains are gone.
I’ve been set free.
My God, my Savior has ransomed me.
And like a flood His mercy reigns;
Unending love, amazing grace.

I pray that each of us find that our chains are gone, and that we bask in the light of God’s freedom and grace.